In this Sojourners post, a observant brother from the Prince Hall tradition asks a very important question about access in the modern age of Freemasonry – Who has it, why, and should it be exclusive? This piece, while brief, explores at least in part these ideas as more and more of a diverse audience is gaining exposure to the meanings of Freemasonry.

The Meaning of Freemasonry

Many things have been said of the Craft, as such, I will not attempt to reiterate them here, but will attempt to express what freemasonry means to me.

My journey began long before I was made a Mason. There was a longing in my heart to understand the deeper mysteries of the world, their respective interrelations and manifestations, and a desire to know the Truth. I would spend many hours reading books of seemingly different natures, only to be delighted to discover a connection between subjects. These associations were meaningful to me because, as I had worked to achieve insight and understanding, I came closer to a more enlightened view of reality. I felt as if I was coming out of the darkness into something a little more distinguishable, a little more clear.

My worldview began to change. I read The Hiram Key, by Robert Lomas and Christopher Knight in college, as the first book about freemasonry I read as a non-mason. I had sensed a continuous stream of knowledge, some would say, from time immemorial, but this book put into focus what I had already sensed. I had realized I wanted to join the Order, out of curiosity, but also to further development, and to honor those wise men that had gone on before me. One could say that, I was seeking to revive the spirit of the Adept within myself. To be a vessel of the divine spark.

Upon being Raised, I was struck at how real it seemed, as during my initiation, I called out and protested as if I was actually the Master in the Temple. My answer to those who would accost me for the secrets of the Temple, was simply ‘Kill Me’. For I knew I could not get away, and I knew I could not oblige them. As the final blow came, I was thrown backward onto my death shroud, and accidentally caught my foot on a brother. My foot was wrenched aside, twisted, my senses not knowing of where the pain and darkness was truly from. I must say this experience changed me. I truly felt death had come, and the embrace of the shroud was comforting. The Lion’s Paw I had received from my father, and it was a very special moment in my life. This cemented my Quest.

From that point on, I strived to the higher ideals of the Order, subduing my passions and improving myself in science and history. Knowledge is a wonderful gift, but it means nothing if it is not put into practice for the benefit of All. Freemasonry then, helped me to become a man, instilling the virtues that, if all possessed, would surely rebuild the Heavenly Temple on Earth. The meaning of freemasonry is to give purpose. This in turn, gives us the ability to, hopefully, transcend into a Higher and more Lofty state of Society, in the spiritual/alchemical sense of the Philosopher’s Stone. There is one drastic hitch or impediment to this dream, however, and that is the insistence of the rules and regulations of the Craft to deny women, the fairer sex, entry into the Order. How can we as Masons do this injustice to over half the population of the world?

I want my brothers to consider this in earnest. Can we rightly deny our sisters, mothers, daughters, wives, lovers, the joys and spiritual guidance that Freemasonry has to offer? Eastern Star is separate but not equal. It is simply not enough, and in the long run, will hurt the progression of establishing the Temple Cornerstone of the World, for all to enjoy and benefit. Freemasonry is more then just a fraternity, and should be recognized as such, but that task will be thwarted if we deny others the right, who are already Masons in their heart, the opportunity to join the Craft. Was it not Mary of Bethany Jesus’s most beloved disciple? Is not Venus the birther of all Men? Why do we close our doors to her?

I shall simply say that, the meaning of freemasonry is that of continuation, of the hopes and dreams of the Adept. 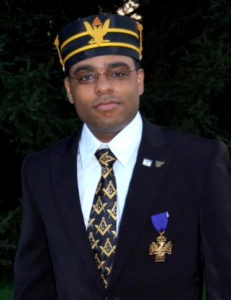 Richard E. Gordon III, was raised a Master Mason in 2010, in Golden Square Lodge #23, 4th Masonic District, Prince Hall Affiliation, Urbana, Ohio, and is a member of Miami Consistory #26 in the Valley of Dayton. He holds a Masters Degree in Applied Behavioral Science from Wright State University and won the “Outstanding Graduate Student Award” (2010) in the Applied Behavioral Science (ABS) program. He also obtained his Bachelors in Psychology in 2007 at Wittenberg University, where he founded and led the Society for Extraordinary Phenomena (SEP). Richard worked as a medical lab researcher at Wright State University Boonshoft School of Medicine in the STREAMS program, which is dedicated to fostering biomedical research experiences for minority students, and studied the biomedical effects of intermittent hypoxia in neonatal rats, with implications for conditions such as sleep apnea and aerospace industry considerations. He is a Research Associate with Vision Genomics, LLC.

You can find more from Br. Richard E. Gordon III on Tumblr.