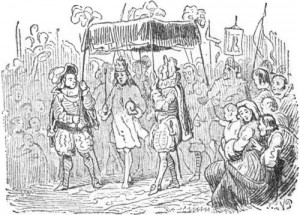 Once upon a time there was a Worshipful Master who was so fond of his Lodge that he spent most of his time rehearsing degrees and attending meetings. There was plenty of fun going on in the Lodge where the Master lived. Bills and minutes were read time and again, and the Brethren thrived on hot pasta dishes.

Visitors occasionally visited the Lodge. One day there came two representatives from Grand Lodge. They said they wanted to help the Lodge, but first the Master would have to hold fundraisers for the Grand Master’s charity and support his agenda. The Master found the GL representatives hypnotic, especially when they promised to increase membership, offset the Lodge’s growing financial burdens, and simplify the operation of the Lodge. Not only were their promises unusually attractive, but their programs had the peculiarity of being invisible to anyone who was not fit for his post or who was hopelessly stupid.

“I say! These must be wonderful ideas,” the Master thought. “If they are true, I would have the best Lodge in the jurisdiction. Yes, I must implement these programs all at once.” And he set the Craft to work under the guidance of the GL representatives.

And so it came to pass that the programs were implemented immediately. Spaghetti dinners, pancake breakfasts, and fish fries became the norm. The Lodge dug into their pockets and produced handsome sums of money for the Grand Master’s charity. Lodge delegates attended Grand Lodge functions and followed the party line unquestioningly.

“Well, now, I wonder how everything is going?” the Worshipful Master said to himself. But there was one point that made him feel rather anxious, namely, that a man who was stupid or quite unfit for his post would never be able to see the benefits that had been produced. Not that he, the Master, need have any fears for himself – he was quite confident about that – but all the same, it might be better to send someone else first, to find out how things were going.

“I’ll send my honest old Secretary to check on the results as promised by the Grand Lodge representatives,” the Master thought. “He’s the best one to see what is going on, for he has plenty of sense and experience, and nobody fills his post better than he does.” So off went the honest old Secretary to a meeting with the Grand Lodge representatives who assured him that everything was going well. “Lord, bless my soul!” thought the Secretary, with eyes staring out of his head.

“Why, I can’t see any improvements in the Lodge.” But he was careful not to say so.

The two Grand Lodge representatives begged him to take a closer look – wasn’t the Lodge running just fine? Although the poor old Secretary opened his eyes wider and wider, he couldn’t see a thing, for there wasn’t a thing to see. “Good Lord!” he thought, “Is it possible that I’m stupid? I never suspected that, and not a soul must hear of it.” “Well, what do you think of it?” one of the representatives asked.

“Oh, it’s excellent! Things couldn’t be better!” the old Secretary said, looking through his spectacles. “I shall certainly tell the Worshipful Master how pleased I am with it.”

By and by, the Worshipful Master sent another honest Brother to see how the Lodge was running. The representatives accompanied him on his journey. As they traveled throughout the Lodge, the representatives made sure that the Brother saw only what they wanted him to see. He saw the Craft working on obscure projects, money being collected for the Grand Master’s Charity, and attendance at Grand Lodge workshops. “But our membership is still in decline, apathy among the Brethren is getting worse, and our financial situation is becoming dangerous,” the Brother thought to himself. And then he praised the programs, which he knew were compounding problems for the Lodge. “Yes, it’s quite sophisticated,” he said to the Worshipful Master when he got back.

The splendid programs became the talk of the district. And now the Worshipful Master himself said that he would check into the new programs himself. Quite a throng of select people, including the two honest old Brothers, went with him to where the Grand Lodge representatives were overseeing the programs.

“Look, isn’t it magnificent!” the two honest Brothers said. “What’s this?” the Worshipful Master thought. “I don’t understand a thing – this is appalling! Am I stupid? Am I not fit to be Master? This is the most terrible thing that could happen to me…”

“Oh, it’s quite wonderful,” he said to them. “It has our most gracious approval.” And he gave a satisfied nod. All the courtiers who had come with him looked and looked, but they made no more of it than the rest. Still, they all said just what the Worshipful Master said, and they advised him to discuss the programs for the first time at the next Lodge communications that was to take place shortly.

On the eve of the meeting, the Grand Lodge representatives sat up all night preparing a report for the Worshipful Master to read on the results of the programs.

“But you still haven’t solved your problems!” a young Entered Apprentice said. “Our membership is in decline, Brothers are staying away from the Lodge, and our finances are diminishing rapidly. At this rate, we’ll have to close our doors soon.”

“Goodness gracious, do you hear what he is saying?” the Craft whispered from one to the other. Then they all shouted, “But you still haven’t solved our problems!” And the Worshipful Master felt most uncomfortable, for it seemed to him that the Craft was right. But somehow he thought to himself, “I must go through with it now. I have too much invested in it already.” And so he drew himself up still more proudly, while the Grand Lodge representatives chased after him with him with more new ideas, even in spite of the obvious.

END_OF_DOCUMENT_TOKEN_TO_BE_REPLACED

In this installment of the Symbols and Symbolism of Freemasonry, we consider a vital emblem of Freemasonry, the compass or compasses. Albert G. Mackey, in his … END_OF_DOCUMENT_TOKEN_TO_BE_REPLACED

Raised to a Master Mason in 1908, at Harmony Lodge No. 17 in Washington, DC, Carl H. Claudy  served as the Master and eventually as Grand Master of Masons … END_OF_DOCUMENT_TOKEN_TO_BE_REPLACED

In this final installment of the Faith Hope and Charity series, we consider the symbolism of charity, or perhaps better called love. It is this attribute that … END_OF_DOCUMENT_TOKEN_TO_BE_REPLACED

In this installment of the Symbols and Symbolism of Freemasonry, we examine the text of Albert Mackey's Encyclopedia of Freemasonry on the symbolism of … END_OF_DOCUMENT_TOKEN_TO_BE_REPLACED