Among the great variety of architectural allusions abounding in Masonic parlance, those relating to “angles” receive relatively little attention, whereas they constitute very important clues to the significance of the whole system.

We have advanced far enough in our investigations to have perceived that the underlying principle of all mysteries of philosophy and religion, past and present, have been what might be termed “ciphers” or “cryptograms” of the ascertained phenomena of nature; in fact, science, almost smothered in superstition, straggling to attain individual expression as the truth that should set men free.

There are nevertheless wonders in Freemasonry, inherited from the Ancient Mysteries, for which there are no purely human explanations, because they are manifested upon an infinite scale. Geometry is the key, and close observation of the angles of certain squares and oblongs shows it to be the medium through which we may hope to obtain a little more light upon this fascinating subject.

Wherever two lines, traveling in whatsoever directions, cross each other, the point at which they cross may be the center of a circle of any desired extent, divided into 360 degrees, the number of which, separating the two lines as they cross the circle, is the correct angle described by such lines.

There are therefore two ways of expressing any plane surface so that another may reproduce it from the description. One is to give its length and breadth. The other is to give its angles.

The most important angle in geometry is one of 90 degrees, or the fourth part of a circle. The upright is determined by the force we call “gravity,” causing the bob of the plumb to point directly to the center of the earth. The horizontal line is determined by the bubble of air in the center of our level seeking an exact equilibrium for its resting point. When we shall have truly adjusted both plumb and level, our reward will be the definition of a perfect square or angle of 90 degrees, with reference to the great circle of the heavens.

This angle will be still farther accentuated in our minds, when we perceive the Sun, at meridian, precisely over our heads and realize that a line from the Sun to the point at which we stand and thence deflected to the horizon, would be this same angle of 90 degrees.

It will be discovered that some of the most important features of God’s creation are inextricably built round the precise geometrical relation of a square to a circle, and that this fact appears prominently in the Masonic ritual.

As we advance in the knowledge of physical laws, especially in the domain of mechanics, we cannot fail to perceive the dependence of every minor consideration upon the great, all-embracing cosmic necessity defined by plumb, level and square. 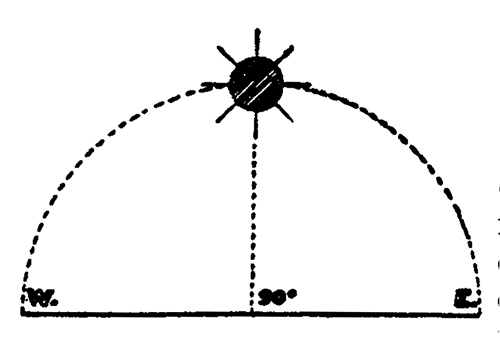 The sun at Meridian

The ancient seer, however, having divined the eternal fixity and cosmic character of the right angle of 90 degrees, sought deeper truths in the many natural combinations of right angles with those of other degrees, in the elaboration of the simplest and most useful in calculation of all plane surfaces,-triangles.

The cosmic wonder in this particular figure is the celebrated Triangle of Pythagoras, allusions to which have been continually cropping up in the course of these papers and from which we shall never quite depart 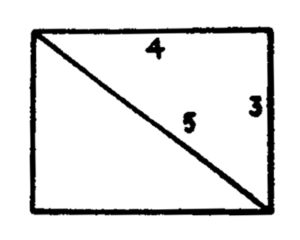 Neglecting for the moment its association with the great problem of Euclid, of which it is the basis, we find it to be the product of the diagonal division of an oblong of 3 x 4, the same that gives us the form of our lodge. The angle of this oblong is one of 37 degrees.

We shall now perform the operation known as the (Pythagorean) “trisection of an oblong,” which consists in making a second and shorter diagonal, from the lower left-hand corner of the oblong in question, joining at right angles with the first. The joining of these two inner lines, with the heel of the left in the hollow of the right line, divides the oblong into three parts of precisely identical form, but nicely graduated proportions, each of which is 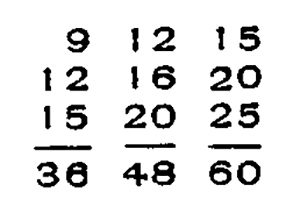 as 3 to 4 and 5, and all of which respond to the following magic square:

There is no doubt about the application we are about to suggest; for we find it on early Bactrian coins of about 120 B. C. in conjunction with the zodiacal figures of the spring equinox and summer solstice, the Lion and Bull, and the ancient Hindu symbol of light, Rch (X-P). 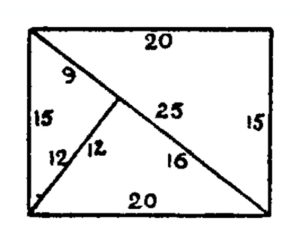 One of the greatest of the ancient conceptions of Deity was as “Boundless Time,” in which He was represented by the slow-moving planet Saturn or Cronos, whom we best know today as “Father Time,” of the scythe and hour-glass. Saturn was BRAMAHA among the Hindus, and ABRAM among the Semites. The numerical value of these letters is A 1, B 2, R 100, A 1, M 40, or 144, which exactly corresponds to the Th 9, E 5, 0 70, S 60, ThEOS of the Greeks, from which we get our word “Theology,” etc. The student will not fail to discover, in the figures given, the great influence of Euclid’s famous 47th problem; for 9, 16, and 25 are the squares of 3, 4, and 5, of which it is constructed. 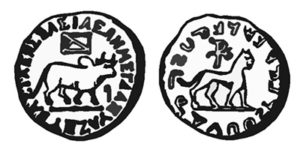 Contents – The Beginning of Masonry
Previous – The Cable Tow
Next – Signs