You are here: Home / Featured / Symbols and Symbolism 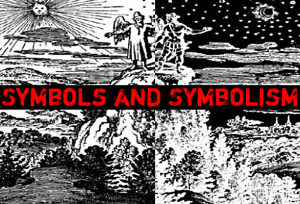 With respect to the term “Mysteries”, no semi-educated mind can doubt that Symbols (especially Masonic symbols) were the Universal Language of Ancient Theology. For the Tutors of the Ancient World – in likeness with Nature – imparted their teachings by way of sight. The ancient sages of Persia, Egypt and Greece adopted the custom of surrounding their doctrines with enigmas difficult to interpret, illustrating men and women with imagery and parables that were more within their reach and knowledge.

So too were the Mysteries a succession of symbols, and the oral aspect of the same an explanation of their significance; in them were amalgamated sacred commentaries, ideas about Physics and Morals, theories about Creation, allegories about Nature, the relation between planets and elements, and all other conceptions regarding the relation between the Gods and mankind.

The word Mystery comes from the Greek word Musterion, which means: “Secret that must remain Occult” or “secret counsel of God”, hence the strict Silence that must be observed and our consequential familiarization with another term which is etymologically applied to everything related to Mysteries: “Mystic”, a word derived from the Greek “Mustikos” which is an adjective of “Mustes” or Initiates, a reason for which Mystic is considered a synonym of Initiate, and henceforth the essential “mysterious relation” between Initiations and Silent Secret Doctrines. In the most exterior sense, Mystery is that which should not be talked about, that which is prohibited to make known to the outsider. In a second more interior sense, the Mystery designates what is received in Silence, that about which no discussion should be had, for these are truths that by virtue of their supra-natural/rational nature, are above any discussion.

Finally, there is a third much more profound sense in which the Mystery is properly Inexpressible, it can only be contemplated in silence, and for that reason is incommunicable.

There exists an alliance between philosophical systems and symbols that are evident in monuments of all ages, and in the symbolic writings of the Parents of Nations that later came to be part of the rituals of Secret Mystic Societies. It was in this way that Patriarchs and Matriarchs alike expressed themselves through a constant series of invariable and uniform principles that form a harmonious and perfect conjunction which together define a ceremony of religious and cryptic nature that necessitates a preparation or initiation on the part of the individual who desires to comprehend them. Thus exist Lesser and Greater Mysteries, being the first ones those of symbolic nature and common use, those that comprise all that is related with the development of possibilities of the human condition and that culminate with what has been denominated Restoration of Primordial State; and these are nothing but the preparation for the Greater Mysteries, which appertain to the realization of supra-human states, taking the individual from the condition in which he/she was left in the Lesser Mysteries and conducting him/her through stages of spiritual order until the Supreme Identity. Hence the dominance of the Greater Mysteries over Metaphysical Knowledge. They are the most exalted and bring the initiate/adept closer to the occult truths of divinity. To characterize these two terms – Lesser and Greater Mysteries – we can utilize two geometric symbols: to the first we can assign a horizontal line, symbolical and representative of human dominion, which, in turn, serves as a base to the second: a vertical line allegorical of one’s ascension to the heavens, a supra-human realization identified with superior states.

All the philosophers that illustrated antiquity were disciples of initiation, being the progress and foundation of the mysteries what, in those times, permitted mankind to free itself from superstitions. Only the Mysteries could liberate man and woman from barbarousness. From them are derived the doctrines of Sages of the likes of Zoroaster, Confucius, Plato and, of course, Hermes Trismegistus. Such is the vastness and timelessness of the Ancient Mysteries that fragments of them can be appreciated still influencing the various Rites of the modern Masonic Order. Some of the most important to date are the rites of Osiris in Egypt, those of Mithra in Persia, those of Adonis in Syria, those of Dionysius and Eleusis in Greece and those of the Druids among the Celts, to mention a few. In all the Mysteries can be found a common factor indicating a same origin: all initiations had a funereal aspect and were about a type of mystical death and resurrection alluding to a heroic personage or semi-god. Through the assimilation of the Mysteries the Candidate was instructed in the subordination of the Degrees, physical trials and tests of knowledge were given in the darkness of the night, the aspirant had to be solemnly and severely tried and entirely purified in order to attain Wisdom and Light. The Esoteric character of the mysteries remained preserved by way of mandates and oaths of secrecy whose violation was punished with death.

The legend of Osiris offered our fore-brothers and sisters their first glimpse of the Masonic Symbolism of Immortality, when Isis found a lush acacia tree over the grave of her dead husband Osiris. This imagery and concept was taken – much later – by the Jews, mainly due to their leaders Moses and Joseph who were both Egyptian Priests and Nobles. At some point, much later in time, the story of Hiram, the martyr-hero of the 3rd Degree, was created, emulating for posterity his allegorical death and resurrection in the persona of every initiate, and the rather timely and propitious symbolism of the sprig of acacia; In the mysteries of Mithra, Zoroaster secluded the initiates in lugubrious caverns, a striking ceremony that was later adopted by most Mystery Schools until it reached the Masonic ritual in the form of the Chamber of Reflection; The Eleusian initiation demanded that the aspirant remain stationary through various intervals of time, hence the Ages of Masonry; In the mysteries of India, the candidate journeyed three times describing a circle that stopped in the South, Symbolic Masonry has preserved these journeys or “travels’ in the form of Circumambulation; And way before our Brothers-Knights of the Order of the Temple came into existence, the Essenes conditioned the admission of all aspirants to the immediate surrender of their wealth to the Brotherhood and their works of charity.

In short, it is my opinion that, for all the aims and goals of our numerous rituals, symbols are of a great transcendence to the Masonic knowledge, compelling us to work in their internal mysteries seeking the Light in everyone of us and in those who surround us, always upholding our sacred principles of Liberty, Fraternity and Equality.

To conclude for the time being, I wish to proclaim that “Any day is good to fix things… including our lives”.

Behold, how good and pleasant it is for Brethren to dwell together in unity!

END_OF_DOCUMENT_TOKEN_TO_BE_REPLACED

Raised to a Master Mason in 1908, at Harmony Lodge No. 17 in Washington, DC, Carl H. Claudy  served as the Master and eventually as Grand Master of Masons … END_OF_DOCUMENT_TOKEN_TO_BE_REPLACED

In this final installment of the Faith Hope and Charity series, we consider the symbolism of charity, or perhaps better called love. It is this attribute that … END_OF_DOCUMENT_TOKEN_TO_BE_REPLACED

In this installment of the Symbols and Symbolism of Freemasonry, we examine the text of Albert Mackey's Encyclopedia of Freemasonry on the symbolism of … END_OF_DOCUMENT_TOKEN_TO_BE_REPLACED

In this installment of the Symbols and Symbolism of Freemasonry, we consider a reading of Albert Mackey's text on the subject of Faith as it pertains to … END_OF_DOCUMENT_TOKEN_TO_BE_REPLACED